Welcome to the FIRST Tech Challenge Robotics Program in Mississippi! We are a statewide community focused on building a better world for tomorrow by engaging students in Science, Technology, Engineering, and Mathematics (STEM). FIRST Tech Challenge teaches students the value of hard work, innovation, and creativity.

The Center for Mathematics and Science Education at the University of Mississippi serves as the FIRST Tech Challenge Affiliate Partner for the state of Mississippi.

The 2020-2021 season, FIRST® GAME CHANGERSSM powered by Star Wars: Force for Change, will celebrate the evolution of our sports and activities that make us physically and mentally strong.

As part of FIRST, we are building a culture that recognizes the athlete in each of us. We know that when we move, play, and compete in any sport, we use our minds—our creativity, imagination, and critical thinking—as much as we use our muscles. Let’s work together to champion the strengths of every person who plays the game and gives us a reason to cheer.

It’s time to be GAME CHANGERS.

The 2020-2021 season, FIRST® GAME CHANGERSSM powered by Star Wars: Force for Change, will celebrate the evolution of our sports and activities that make us physically and mentally strong.

As part of FIRST, we are building a culture that recognizes the athlete in each of us. We know that when we move, play, and compete in any sport, we use our minds—our creativity, imagination, and critical thinking—as much as we use our muscles. Let’s work together to champion the strengths of every person who plays the game and gives us a reason to cheer.

In this year’s game, ULTIMATE GOALSM presented by Qualcomm, teams will be placing Wobble Goals in different locations on the field, launch 5″ diameter rings into goals of different heights and try to knock down targets in an exciting End Game period to score as many points as possible.  Awards will be given at league tournaments and the state championship to teams in not only robot performance, but also for achievements off the field – including design and innovation, teamwork and outreach.

It’s time to be GAME CHANGERS.

The 2020-2021 season presents some unique challenges.  As a result, regions around the world had an option to host robot matches remotely where teams competed independently using half-size fields and without an alliance partner or opponent.  All Mississippi FIRST Tech Challenge events are being held remotely.

Beginning with the 2020-2021 season, the Mississippi FIRST Tech Challenge (MS FTC) will be implementing leagues.  A league is a group of 10-16 FIRST Tech Challenge teams in Mississippi that compete together in a series of league meets.  Leagues are generally formed based on geography and will be defined by the MS FTC.  The intent of league implementation is to provide teams with more opportunities to participate in the annual game challenge.  Teams compete at league meets which are smaller than the traditional qualifiers hosted in the past and do not involve judging or award recognition.  The league selects teams or assigns committees to plan the meets.  Each league must host at least three and no more than five league meets, one judging practice sessions for teams of the league and the league tournament.  The meets and league tournament replace the traditional qualifying tournament advancement system.

The Mississippi FIRST Tech Challenge Leagues are organized geographically with an initial grouping of three leagues: the Northern League, the Central League, and the Southern League (see map image below).  League Coordinators have been named and are responsible for the implementation of the league meets and the League Tournament. 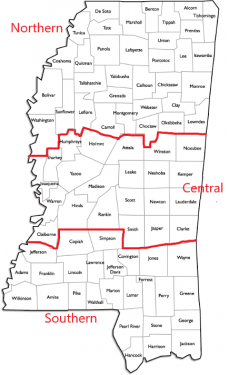 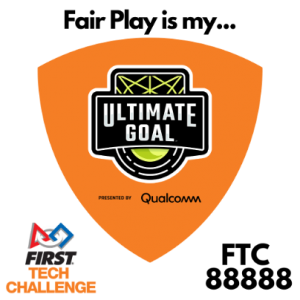 The current reality of the global pandemic has forced an adaptation in how FIRST Tech Challenge teams participate in events – FTC Remote Events. The events rely heavily on the teams to honestly represent their participation in the Remote Events. The program relies on teams to score their own matches honestly and accurately.

Since the announcement of this model, it has been suggested that some teams may take the opportunity to be less than honest with their match reporting. Frankly, there is no way to stop or prevent this. However, the FIRST ethos and mission provide encouragement and recognition to “do the right thing”.

The Request of All of You

You are expected to do the following:

· Honesty and integrity are some of the hallmarks of FIRST teams. A favorite definition of integrity is “what you do when no one is watching” (C.S. Lewis).

· Hold yourself and your team to high standards of honesty and integrity.

· Be open and transparent about all that your team does and accomplishes this season. Show the world that you have nothing to hide and that you are proud of your accomplishments!

· Post a tagged walk-around video of your robot. Describe it and its functionality. Think of it as a self-inspection. You could even follow the inspection checklists.

· Post a tagged video of at least five matches your team submits as part of all Remote Events you participate in this season. As a tip, for reasons of youth safety, avoid including faces and/or names in the videos. Create a playlist or channel for the videos and share widely!

· Share some of your designs with others via shared documents or videos.

· Encourage the teams in your communities to do the same!

· Hold the members of your team accountable.

· Encourage other teams to be similarly committed to the values of FIRST.

· Be a positive role model for what it means to be a FIRST team!

· As a team, take the Fair Play for FTC pledge (see below).

The Offer to Each of You

If your team is willing to do all of the requests listed above, then have one of the two primary coaches for your team send an email to mlowe@olemiss.edu attesting to your team’s participation in this Fair Play for FTC effort. Mississippi FIRST Tech Challenge will:

· Mail your team a set of custom and personally signed “Fair Play” stickers to proudly display on your robot; and

· Provide your team a “Fair Play for FTC” digital badge that can be added to your team’s website and other media.

Be sure to have your coach include a mailing address in the email.

· As a FIRST Tech Challenge Team, we hold to the FIRST Core Values.

· We believe that the spirit of Gracious Professionalism guides us to behave honestly and with integrity as we participate in FIRST.

· We recognize that the learning we accomplish is the primary reward for our participation in the FIRST Tech Challenge.

· All Remote Event Matches we participate in will be scored honestly and openly, as if we were participating in a Traditional Event.

The 2020-2021 Mississippi FIRST Tech Challenge Championship will be a REMOTE EVENT scheduled for April 12-18, 2021.  The closing ceremonies will be held on Thursday evening, April 22, 2021 as a VIRTUAL EVENT.

More information and details to come!  Save the date!

Here are the results and awards from the 2019-2020 Mississippi FIRST Tech Challenge Championship:

➾ What is FIRST Tech Challenge?

It’s way more than building robots. FIRST Tech Challenge teams (up to 15 members, students aged for grades 7-12) are challenged to design, build, program, and operate robots to compete in a head-to-head challenge in an alliance format. Participants call it “the hardest fun you’ll ever have!”

Guided by adult coaches and mentors, students develop STEM skills and practice engineering principles (like keeping an engineering notebook), while realizing the value of hard work, innovation, and sharing ideas. The robot kit is reusable from year to year and can be coded using a variety of languages, including Java. Teams design and build robots, raise funds, design and market their team brand, and do community outreach to earn specific awards.

Participants have access to over 80 million dollars in scholarships at over 200 colleges and universities. Find out more at firstinspires.org.

A highlight video of the 2019-2020 SKYSTONE competition may be viewed here.