Welcome to the FIRST Tech Challenge Robotics Program in Mississippi! We are a statewide community focused on building a better world for tomorrow by engaging students in Science, Technology, Engineering, and Mathematics (STEM). FIRST Tech Challenge teaches students the value of hard work, innovation, and creativity.

The Center for Mathematics and Science Education at the University of Mississippi serves as the FIRST Tech Challenge Program Delivery Partner for the state of Mississippi.

FIRST FORWARDSM presented by Qualcomm is our transportation-themed competition season for 2021-2022.  Transportation drives us forward, impacting economies around the world and making us all more globally interconnected.  This year’s theme, FIRST teams have the power to reimagine a path forward and invent the future of transportation.

ABOUT
SCHEDULE OF EVENTS
LEAGUE INFORMATION
STATE CHAMPIONSHIP
CONTACT US
ABOUT

FIRST® Tech Challenge teams will race against time to transport hard-to-move essential goods as they explore the future of transporting relief to those in need in the 2021-2022 challenge:

Plans are underway for the 2022-2023 FREIGHT FRENZY season.  Our current plan is to hold traditional in-person events.

Held at various locations throughout the state

Beginning with the 2020-2021 season, the Mississippi FIRST Tech Challenge (MS FTC) implemented leagues.  A league is a group of 10-16 FIRST Tech Challenge teams in Mississippi that compete together in a series of league meets.  Leagues are generally formed based on geography and are defined by the MS FTC Program Committee.  The intent of league implementation is to provide teams with more opportunities to participate in the annual game challenge.  Teams compete at league meets which are smaller than the traditional qualifiers hosted in the past and do not involve judging or award recognition.  The league selects teams or assigns committees to plan the meets.  Each league will host at least five league meets, one judging practice sessions for teams of the league and the league tournament.  The meets and league tournament replace the traditional qualifying tournament advancement system.

The Mississippi FIRST Tech Challenge Leagues are organized geographically with an initial grouping of three leagues: the Northern League, the Central League, and the Southern League (see map image below).  League Coordinators have been named and are responsible for the implementation of the league meets and the League Tournament. 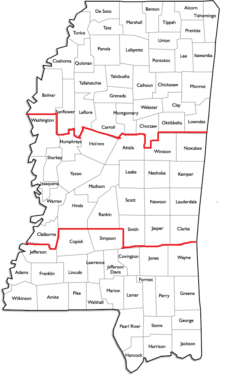 The Mississippi FIRST Tech Challenge Championship tournament is tentatively planned for the weekend of March 4-5, 2022 at the University of Mississippi in Oxford.  More details will be announced as plans firm up.

➾ What is FIRST Tech Challenge?

It’s way more than building robots. FIRST Tech Challenge teams (up to 15 members, students aged for grades 7-12) are challenged to design, build, program, and operate robots to compete in a head-to-head challenge in an alliance format. Participants call it “the hardest fun you’ll ever have!”

Guided by adult coaches and mentors, students develop STEM skills and practice engineering principles (like keeping an engineering notebook), while realizing the value of hard work, innovation, and sharing ideas. The robot kit is reusable from year to year and can be coded using a variety of languages, including Java. Teams design and build robots, raise funds, design and market their team brand, and do community outreach to earn specific awards.

Participants have access to over 80 million dollars in scholarships at over 200 colleges and universities. Find out more at firstinspires.org.

A video of the 2020-2021 Mississippi Championship Awards presentation may be viewed here.